Garden Journals and End of Term

what do plants need to survive

‘my dream garden’ has a sunflower in it

‘Me being happy in the garden teaching gardening’

What a plant needs to survive

planting sweetcorn, I’m not sure why range was so important

Details of our seedling lifecycle with some unfortunate peas

We do love our sunflowers

Most of my gardening clubs/classes run all year round or March-October, however each year for some children it is time to move on to secondary and say goodbye to the garden they have helped build.

It always feels a little sad but gives me a good chance to reflect on the work we have done and update worksheets and lesson plans. It also means a last look at the Garden Journals we use.

I don’t mind that its my totally biased opinion, I love these journals.

These are some of our overwintered broad beans. They went in directly back in late September and have done fantastically. A heritage T&M variety the kids were fascinated to be growing two colours. They shot up very quickly in the raised bed and we popped a netted tunnel over them in mid december. Am thinking I might get them to mash them up for a broad bean dip to make the most of that colour. Need to check some recipes and preserving tips as well. Would love to still have some for one of the schools community cook events.

I’m quite fond of broadies, they are great for younger children with less manual dexterity and having something to sow in September. We planted these a couple of weeks before half term and as the weather was very nice we had some pop up so they were there for the children to find after the break. 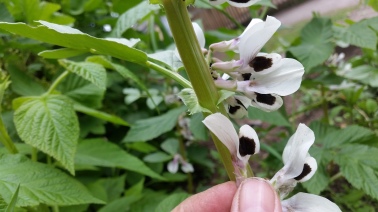 Now they look like this and the children can see the lovely multi coloured flowers designed to provide a landing pad and a guidance system for the pollinators to get to the nectar. We looked at how bees see colour, the fact they don’t see red and talked about plants and flowers that were multiple colours to help bees and other pollinators to see where they are going. 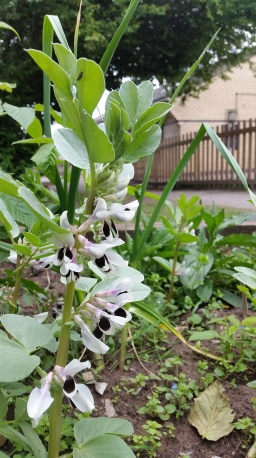 Multi coloured Broadies
As they are year two we didn’t get too technical but it did remind me to pick up some coloured plastic so that children could see how a bee sees. For those who do want to get a little more technical, there’s lot’s of research on Bees and colour.
Posted in gardeningclass, schoolgardener, STB. Leave a Comment »

At Whitehall, at the end of one hideously rainy session we quickly threw some old radish seed I found in the bottom of my seed box into a pot. It got moved to one side the week after when I saw the pot with no label and realised I’d forgotten what I’d hurled in. Luckily, by the next week they were up and a quick taste confirmed my radish suspicions. Can’t wait for them to be big enough to harvest so that we can identify the variety

A bit of a gap

You may have noticed there is a bit of a gap in my writing and work. Unfortunately in Aug 2015 I was involved in a hideous car crash which meant time in hospital and a long rehabilitation. Now, Sep 2016, I’m returning to work part-time and building up hopefully to full-time again. The long term effect of the crash has meant I have different capabilities in terms of the hours I can put in and how physical the work gets. As with most people who have suffered an accident and spent time within the NHS I am happy to sing the praises of all of the staff I have come into contact with (bar one arrogant consultant!). I am only alive because of the emergency services which has made me even more of a NHS supporter and I would like to scream in frustration at those who talk it down or think it’s ok to cut funding.

This year for the first time we grew purple podded peas in three of my schools. They were from the lovely Mark Diacono and Otter Farm . After some serious sowing sessions we had a great germination rate and the seedlings all grew beautifully, when we transplanted them, they went into a traditional style raised bed with bamboo poles, they went into pots with sticks, in a trough and up onto the trellis up the side of the pagoda, anywhere we could fit them in. My favourite setting were these growing up the football field fence.

The first batch were ready just in time for the Year One’s at one school to harvest on their last session before the holidays. Huge excitement at the act of picking as some children had never picked something from a plant. Then the thrill of opening the pod and seeing the gorgeous green peas nestling inside, the crunch of peas, the conversations about who had the most in their pod. It was a fabulous session and reinforces to me why I do this job.

And it wasn’t just the Year One’s. At a different school I repeated the process with some Year Five’s, again some had never picked something from a plant and eaten it directly. The third school with these had planted them much later and we are still awaiting flowers so hopefully they will be ready in September.

Most of the children had never harvested something and eaten it straight from a plant. Can you imagine that?

For me, picking and harvesting was just something else you did. One of my first regular chores was making the mint sauce, for the lamb my uncle had given us, this meant simply picking some fresh leaves from the plant in mums garden. It never occurred to me that I was harvesting natural organic local produce, to use on fresh free range produce from a trusted local supplier, it was just what I did on some sunday mornings.

Wildlife hatching on the Hollyhocks 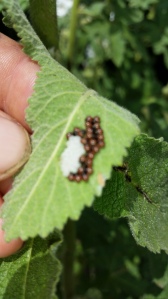 Not quite sure what these are but they used to be bright green. The year one’s and I have been watching them for two weeks and are excited to see what they turn into. They are living on the underside of one of our hollyhocks.